What does it mean to be “stuck with words” or “reading between the lines” or “not reading into anything” as a hearing impaired person? Read on for a poetic exploration…

On those words, I’m going to start with a poem:

Not to be all CliffsNotes-y, but what I’m writing here has to do with language. I know that’s broad. But how I use it (I suppose as a hearing impaired person) for poetry (how I might be suggesting to use it, how I see it used?), its messages between the lines, its repetition, its saying the unsayable; how does it even work with our purposes if we are “still stuck with words”? If they are just words, then where does the emotion come in? If they are just words are we always reading in between the lines? That’s a good question…

And on “reading between the lines” and contradictorily, “don’t read into anything” – these colloquialish phrases – which I admit I feel affinity with in this quest to get poetry written: If we are to read in between everything we write and say, and also not read into anything, are we always sorting through hidden meanings, and if so, what does that mean?

This leads me to think of repetition- Why do it, when outside of the artistic realm, we’ve been told not to, so much of the time (“that’s what you said yesterday” and so forth). Why should artists and poets keep doing it? This brings up what Gertrude Stein called insistence. Repeating subtle variations to be “heard” about the din of a crowd. Digging thru this insistence through philosophical inflection, and have an epiphany sneak up on you at the end of the poem when you weren’t expecting it. Not that I can perfectly explain how that happens. On being mystified on what mysteries language holds contradictorily in both its breaking apart and its words coming together. All of this mixes with what I don’t hear, mishear, and what I want to hear, merging in a full-on experiment. Working with this mix (insistence, repetition, hearing loss…) drives my poetix to getting to the bottom of other concerns of mine in poetry: time-based-ness, nostalgia, dejavu, memory. And with memory(ies), I don’t think we can ever get to the bottom of them. All of these investigations lead to a kind of internal rhythm, a kind of music, (but with no sound) in my poetry, a kind of music both figuratively and literally. Perhaps one would expect a person with a hearing loss to not quote so many pop songs, but they’re there, place holders for what couldn’t be said otherwise. So it’s a meta meta what’s been said, to say what I wanna say. In this word-music created with the line, the motion of one phrase never really slows, and the prose poem format makes it feel like nothing can afford to stop.

Then there’s the Schoolhouse Rock effect-

NOT THIS BUT THAT from the song “Conjunction Junction what’s your function” (Schoolhouse Rock was a 70s educational children’s TV show). That phrase and the images of its animated train cars smashing together with the words NotThisButThat seem to be the CliffsestNotest way I can say what is in my mind when I’m trying to write. How words, ideas, and phrases come together, and my going along or against it. Just like those train cars slamming together. How to pry open that meaning – when we say “not just this or just that” – what is the space AROUND “just this” or “just that”? It’s a loaded space. Where can you go with it? There’s gazillions of these spaces, this reading between, a space filled with something. Why is this even something to explore, this “space” around the throwaway phrases that only exist with a reading between?

I am going to intercept here with a poem of mine that feels appropriate in this essay’s juncture.

This poem is called “I’m telling you don’t forget”:

To remember who you were

To remember what it was

To remember what it is

To remember how it was

To remember what it went

To remember how it said

To remember how it sounded

To remember how it went

To remember what they did

To remember how it goes

To remember what it meant

To remember that’s what she said

To remember what it aint

To remember who said what

To remember what said what

To remember who knew who

To remember who died then

To remember who all knew who

To remember what was what

To remember who didn’t die

To remember who said what they said

To remember who didn’t remember you

To remember who didn’t want to know

To remember who tried to change you

To remember don’t be a cliché here

To remember don’t let this poem be 8th grade desperation

To remember, once again, all together now, the more things change the more they stay the same

To remember most poets don’t want to hear that

The more things change the more they stay the same

To turn around a cliché

Can it be encapsulated in Hey.

To remember maybe these lines need to be more of a mystery.

To remember somebody might be reading between the lines

To remember there’s a poem in between the lines

To remember in between the lines is where everything happens

So why should I even write

An extremely good question. Is it possible to rest our poetics on a question. To think we can. I think we can –let the poetry move long after it has ended. To quote what I just read, “Why should I even write anything.” I just did. So there. Translate as needed. It feels like maybe I haven’t really said anything there/here with the some things I said…In these in between the lines, insistences, repetitions…getting at…an un-destination… To get at an un-defined space of between the lines. Is this reading between another way to say – that we are trying to use poetry to say the unsayable, to speak the unspeakable, the unexplainable? If that’s what poetry may be …what are we actually saying here?: “Yeah I know it’s unsayable in “regular” language?” So what’s regular? Even though I tried to make “reading between the lines” sound all fancy, that is a layperson’s phrase after all which brings me back to filtering class through everything it seems.

I’m curious when it’s said that a poet is “just” playing around with words. Does this mean that wordplay for poets is “just that” there is no deeper relationship to the cumulative effect of the repetition? I think I’m surprised by such a question. I think the cumulative effect does do something. That shouting across a loud room to be heard. Or maybe a quiet room with someone who heard you but didn’t hear you and said HUH? as in WAIT WHAT are you saying? Then there’s the strait, or bent up reason for repetition for me, of course, my hearing loss.

It could be said my poetics practice and filmmaking practice are related. Is there a relationship between the lining up of images together to the lining of sentences or words together (even if are stuck with them?) Probably. And probably because of my hearing loss I “see” images and thoughts moving by like frames, more than I “hear” actual sounds or words. (Well, that is literally; internally is probably another story.) Yet, I do “hear” gaps and repetition simultaneously when I “see” them. Translating that to my filmmaking practice can mean a similarity when I shoot a recurring image or fade-outs over and over. These film effects could have something in common with how I “hear” tonal inflection even tho I may not hear all the words. So if I don’t hear all the words, in the way that film collects repeated images to be spliced together to make meaning, perhaps the use of repetition invites comparisons to such taping together of film frames (or words/sentences for poetry’s purposes). Though most of my films actually are “edited in camera”, which means I carefully shoot scene after scene intuitively or like jazz improvisation, and I don’t actually cut the film up afterwards. That could be said is same as what I’m doing in prose poems – with that internal rhythm that’s created – that hopefully should counter prose poem doubters who say the prose poem doesn’t do ENUF with the LINE…The same could be said for edited-in-camera doubters who say those of us who “edit in camera” don’t do ENUF with “editing”. It’s simply a different way of creating - A WAY OF SEEING, a phrase I’m borrowing from many a poet and filmmaker.

As I near the end of this essay, what does it truly mean to read between the lines? What exactly is the reading? What exactly are the lines? As a hearing impaired, working class queer, what does it mean for me to “read between the lines” and for others to “read me” between the(se) lines? To find “the official story”, how far we must “dig” and “re-read” to discover truths – even truths that could be right in our face? Perhaps poetry and film can be ways to do that.

And the next time someone tells you to “read between the lines” and to not “read into anything” ask yourself, what does that really mean? 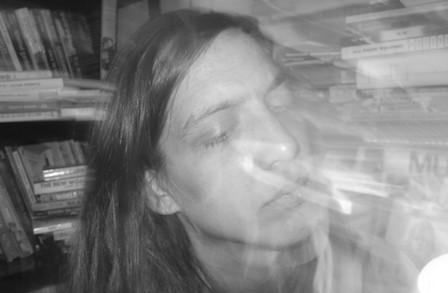 Stephanie Gray is a poet-filmmaker known for Super 8 films and poetry that explore the experience of urban space, queerness, disability and class. She explores the mysterious ground between pop culture, fact, fiction and desire, while working between nostalgia, place and memory. She is the author of two poetry books, most recently, Shorthand and Electric Language Stars (Portable Press at Yo-Yo Labs, 2015), and four chapbooks, including Under the Surface (above/ground press, 2018) and A Country Road Going Back in Your Direction (Argos Books, 2015). Work also appears in the anthology How Lovely the Ruins (Spiegel & Grau/Random House, 2017).