I’m an artist working with video, sound, sculpture, and performance. I’m from China and I’m currently based in Boston. A lot of my art plays with the poetics and absurdities of digital tools and culture and tries to make sense of identities and bodies in virtual spaces.

I spend a lot of time making silly websites. I see it as a way for me to draw or sketch without having a sketchbook, or without really wanting to draw. One example of a website is one that generates fake Sylvia Plath poetry through natural language processing. I make many websites like this. Every year I get a bill of hundreds of dollars for trying to keep the domains for the next year, and I usually say no.

The beginning of my fascination with technology started because of the urge to bypass internet censorship in China where I grew up. We were a bunch of high school kids trying to see art, music, and fashion that was outside of the great firewall. The technology offered us the possibility to imagine a new freedom to learn, create and publish.

Inside a country where you can’t really speak your mind freely, publishing is something that’s completely controlled. Growing up always having to think about what I write, and especially what I put online, I grew to really value the freedom to publish, to share ideas and information. Even for a place like here where everyone has more freedom to express themselves, the content we consume is still more curated by platforms and determined by machine learning. What is lacking is the freedom to accept strangeness and be able to discover content independently.

I’ve been thinking more and more about creative publishing. I found this quote from the book “Post Digital Print” by Alessandro Ludovico, which I thought was something really important to think about. He was talking about Avant Garde and independent publishing: “The main concern here is neither commercial success nor the aesthetic purity of the printed experiment, nor even the archiving of works. Rather this kind of publishing is all about fostering and spreading ideas among like-minded people.”

Here he’s talking about print media, but the same idea can be expanded to other forms of DIY publishing, such as pirate radios, self-released CD’s and cassettes and many more. For me, one of the biggest attractions of DIY publishing is the possibility to build very intimate communities and establish communication channels with more personal accountability. It is amazing to see people coming together from different backgrounds to collaborate on something creative and often times rebellious against established power structures.

We started a collective in Boston with people doing digital, electronic, and experimental music and art. The whole collective is very much based around the DIY ethos. Existing in a community of people making and publishing from their living rooms and bedrooms with computers and tape machines, we took a very similar approach. But we didn’t really want to release our music on cassettes since we’re very drawn to the digital hi-fi, and we didn’t want the albums to only have music. We ended up making these flash drive releases that camouflage as cassettes, and on the flash drives are songs, digital paintings, snippets of codes, etc. 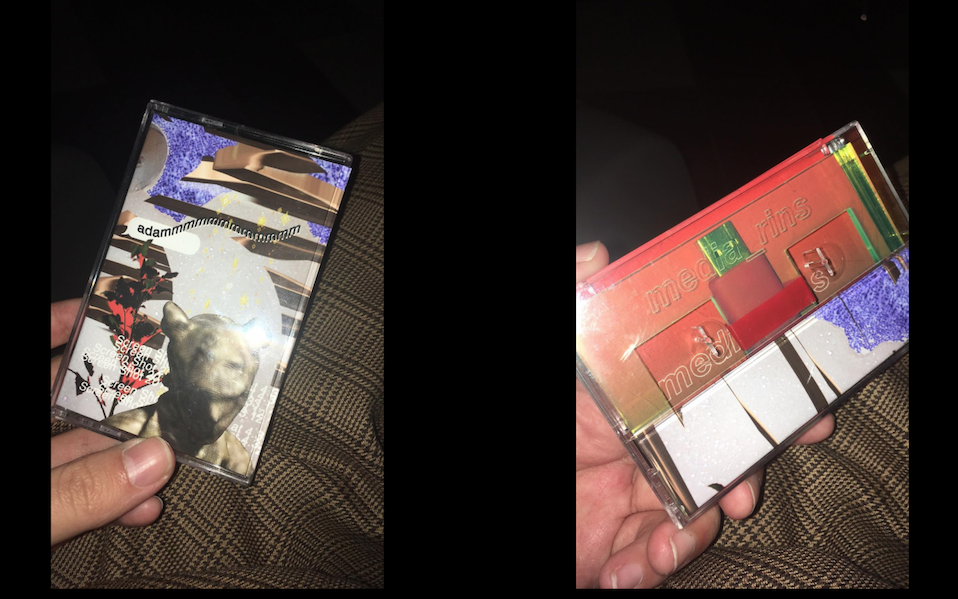 One of the biggest challenges of publishing through platforms is that it becomes something that limits the formats for creative publishing. The platforms are taking care of every aspect of creative publishing which ends up leaving the content creators very little freedom when they want to go beyond the formats supported by the platforms. When we released the albums on the internet through platforms such as Bandcamp and Soundcloud, we’re no longer able to publish everything that was included in the flash drives and the albums had to be reduced to only stereo music.

Newer digital technologies such as the distributed web, create room for a new DIY that carries on the philosophy of the old DIY and translates not only the content but the infrastructure of the old DIY, so it can exist online. This new DIY should, like the old DIY, depend on a collective action instead of centralizing platforms and distribution.

The first thing I ever made on the distributed web was a website that tracks all active users’ cursor information. This was a very liberating experience because I didn’t have to go through all the hoops of getting a URL and trying to find somewhere to host it because it was hosted straight from my computer. And it was a very fun experience of being able to see actual connections that I’m making with other people that are also online at the same time.

The freedom to publish and remix is something that’s very important for creative people today. Sampling collages and found footages are such a big part of what a lot of people are creating, and also in terms of making zines. The history of making zines is copying from a lot of other things because you have a scanner, a printer, and access to information. You want to curate and remix that information and make it your own. However, attribution and history are very important in this aspect of remixing. This is a quote from Aria Dean’s “Poor Meme Rich Meme,” which was mentioned in one of the skillshares. “When we say that the internet extends and exacerbates the same old offline relations, we mean it. In keeping with historical precedent, the cultural and affective labor of black individuals online largely goes unrecognized and un(der)compensated.”

We created activities for every one of the skillshares. The first one was an analog experience of the distributed web, where we created poetry collectively. And in the last one, we created a digital zine that’s based on the distributed web, where everyone created one page of it, and we made it into a letter to the artist. All of the pages are forked from this main page of the zine, and everyone still has authorship to all the pages, so if they ever want to change anything, any of the content, or if they ever want to delete pages, there’s still the control to do that. 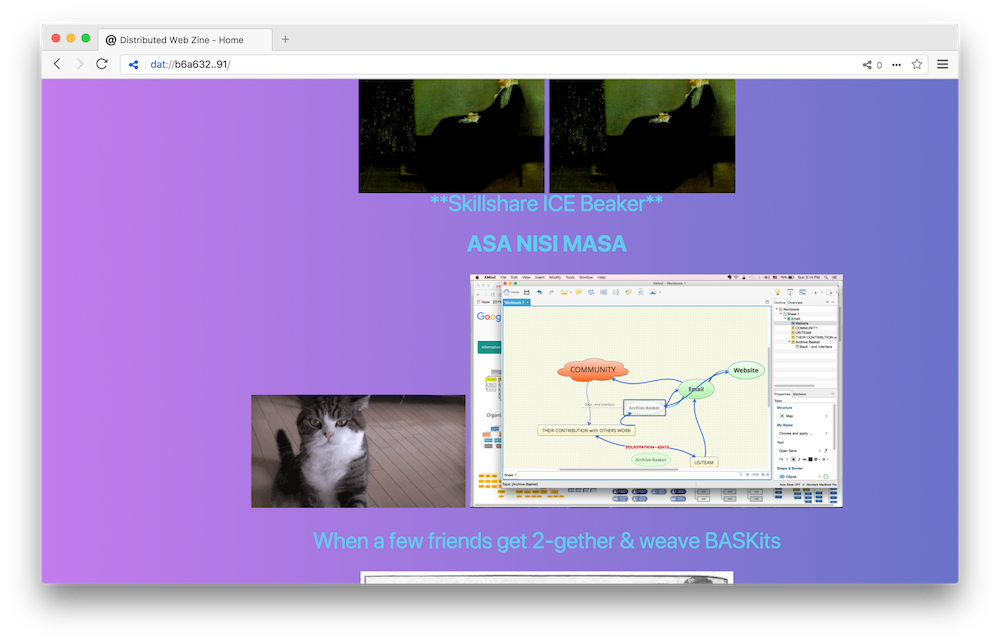 Because of this fascination with digital formats and the physical distribution of digital formats, I made a simple tool called Dat QR, which is a QR code reader and generator for Dat URLs. It de-obscure the very long strings of letters and numbers for Dat addresses. Being able to print out the codes and give something physical to someone else becomes another part of the process of sharing and creating communities. 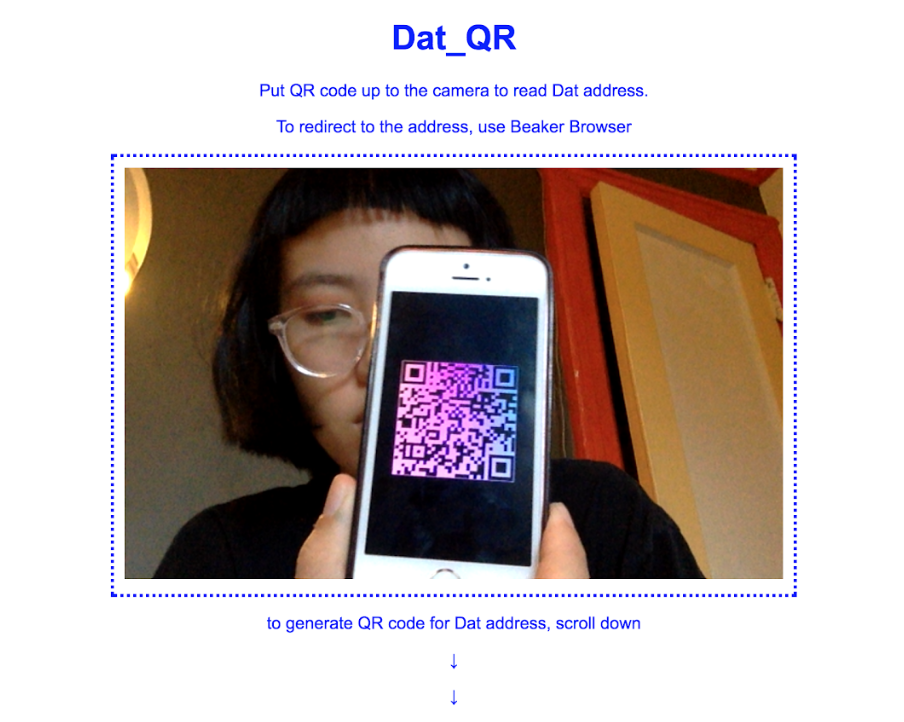 This essay has been edited by Shira Feldman and published on January 28th, 2019. 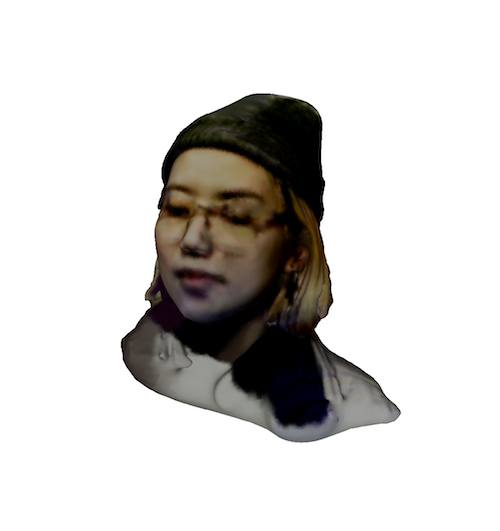 cleo (yuekai) miao is a Chinese artist currently based in boston, MA. She is an anti-disciplinary media artist and works to make sense of identities and bodies in virtual spaces. She plays with both the poetics and the absurdity of digital tools and culture, and considers the reality that is configured and mediated by images. Through playful investigation, cleo questions and spectates the role and affect of photographic images and mediums. Having grown up with the Chinese Internet, she is passionate about new possibilities of freedom and democracy offered by technology. However, at the same time she is wary of the systematic and algorithmic oppression and violence supported by unethical or inconsiderate technological infrastructures.