by Cori Kresge and Taeyoon Choi

A set of movement scores for Distributed Web of Care developed by Cori Kresge and Taeyoon Choi between 2018-2019 in collaboration with DWC stewards and students from the School for Poetic Computation.

The scores in various forms were developed and shared by Cori Kresge for the Uncomputable in 2018, Movement, Memory, and the Unconscious Resource and Code Movement workshop in 2019 at the School for Poetic Computation in New York.

The scores were adapated for workshops by Taeyoon Choi for the Decentralized Web Summit in San Francisco, M+ Museum in Hong Kong, Nam June Paik Museum in South Korea, Istanbul Design Biennale and various venues between 2018 and 2019.

This movement score is a documentation of a participatory performance presented by Cori Kresge and Taeyoon Choi for Refiguring the Futures conference organized by REFRESH / Eyebeam at the Knockdown Center in New York in February 10, 2019. The performance was accompanied by music and sound by stud1nt and Tiri Karanuruk. 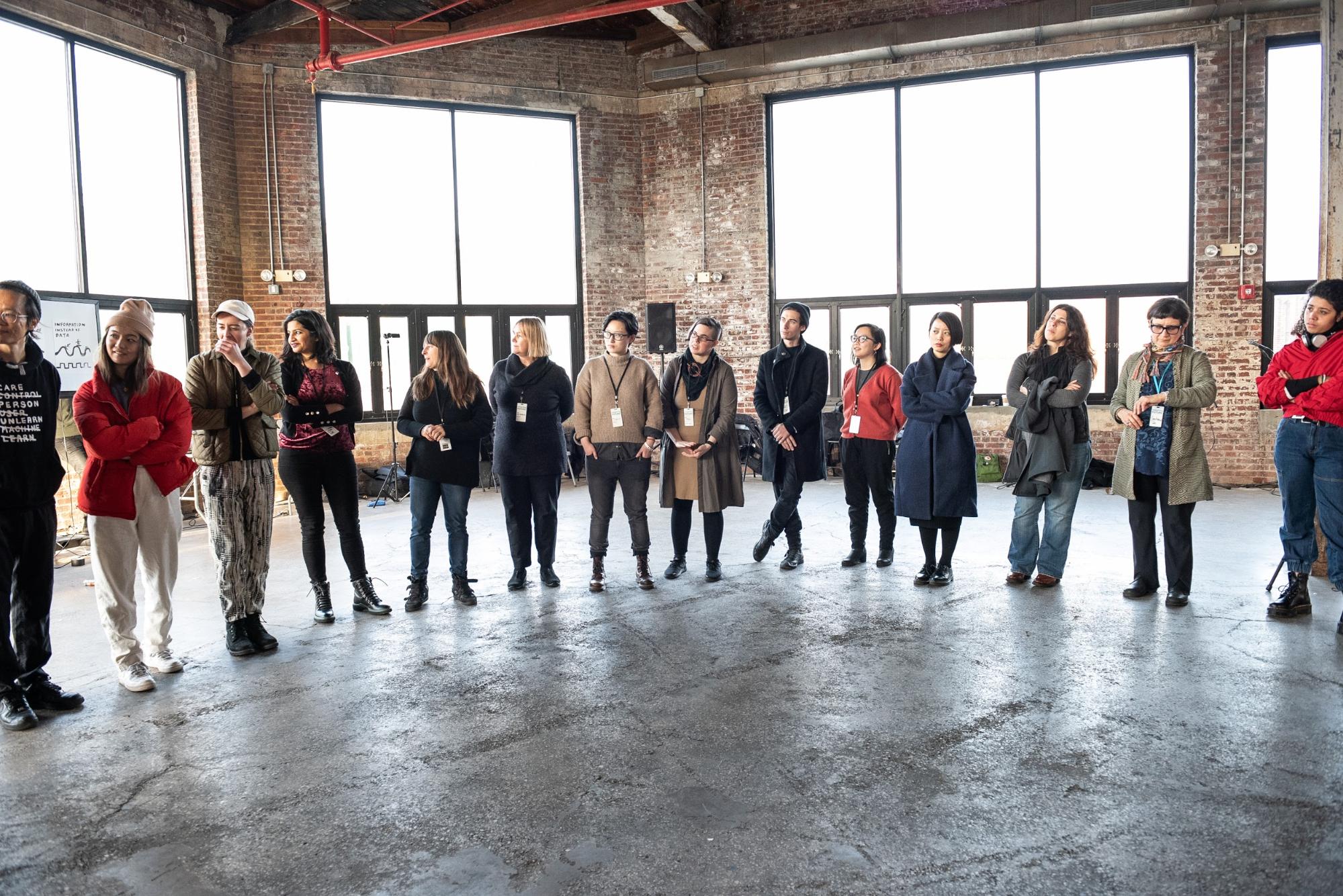 Group forms a circle. Everyone stands around the circle.

Everyone closes their eyes.

The activity leader instructs the group:

“Imagine you are a big animal.”

“Walk as slowly as you can to the center of the circle.”

“If you feel other’s presence, take a moment to pause.”

When the group is tightly close to each other in the center, ask them to open eyes.

Walk back to make a circle. 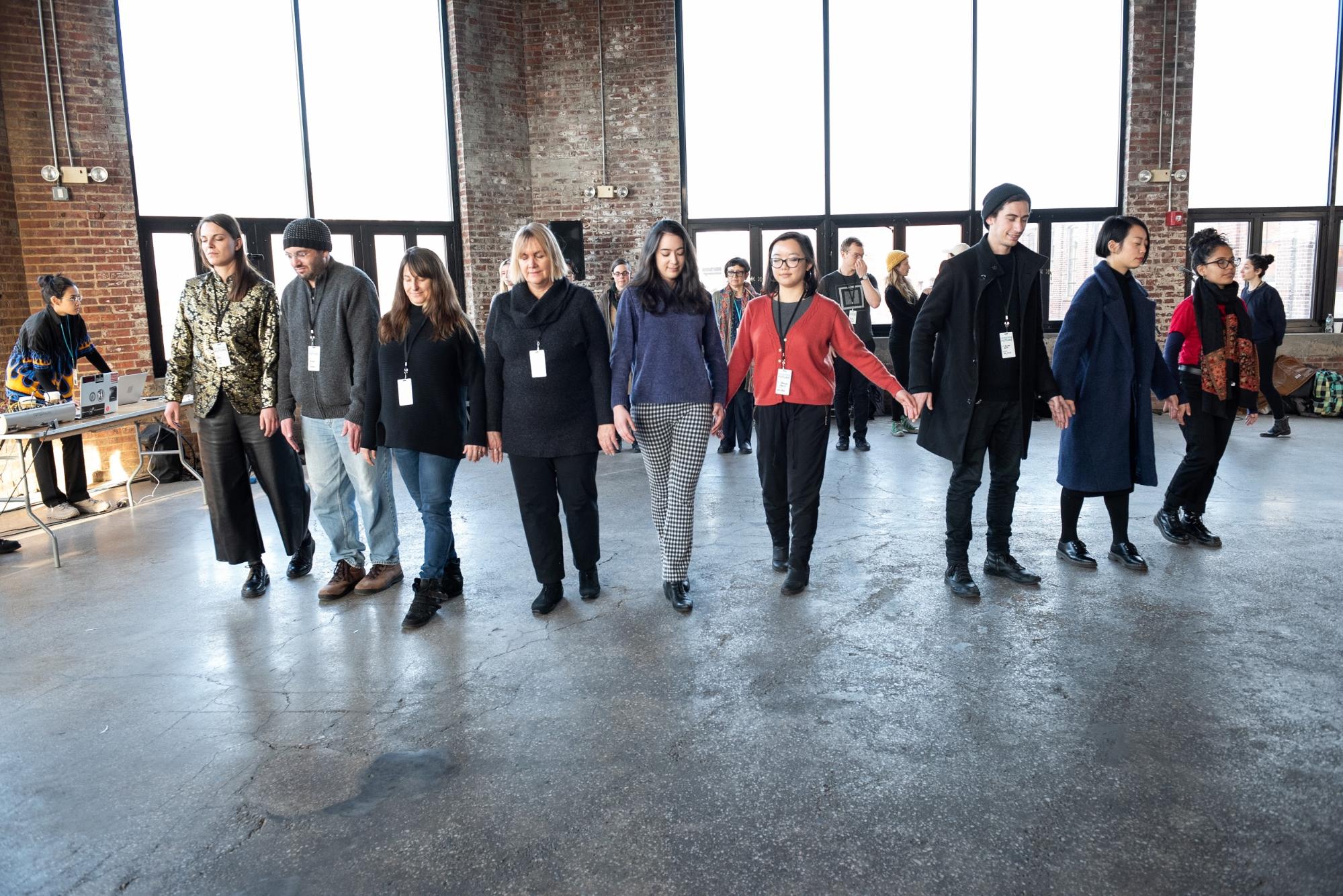 Walking together – lead by Cori

Everyone has their shoulders touching, forming a long line.

They close their eyes.

They try to walk all together in a group at the same speed. They walk across the room.

Try a few times until everyone can walk in a similar speed.

Everyone pairs up with someone next to them.

One person (leader) has their right palm facing down.

Another person (follower) has their right palm facing up.

Their palms are touching. They communicate only with their touch, no sound.

The palm-down leader is guiding the follower around the room. With extreme care to the safety and wellness of the follower.

After about 10 minutes, the activity leader instructs the group they can exchange their followers using only eye contract to agree upon the exchange, no words.

When two leaders have made eye contact and agreed, they gently exchange their partners who still have their eyes closed.

After about 10 minutes, the activity leader instructs the group they can connect to other pairs, still using no words only eye contact agreement, and make a long line of followers / leaders.

The leaders are now taking care of two or more followers. Those who are at the end of the line can switch the roles.

Materials: a spool of soft strings or ribbons.

Concept: Everyone is a node and the strings are the networks

The facilitator asks if someone wants to become a dictator of the network. The dictator can tell everyone what to do, where to connect, and how they connect.

Dictator can connect the network themselves or ask another node to connect on behalf of their direction. 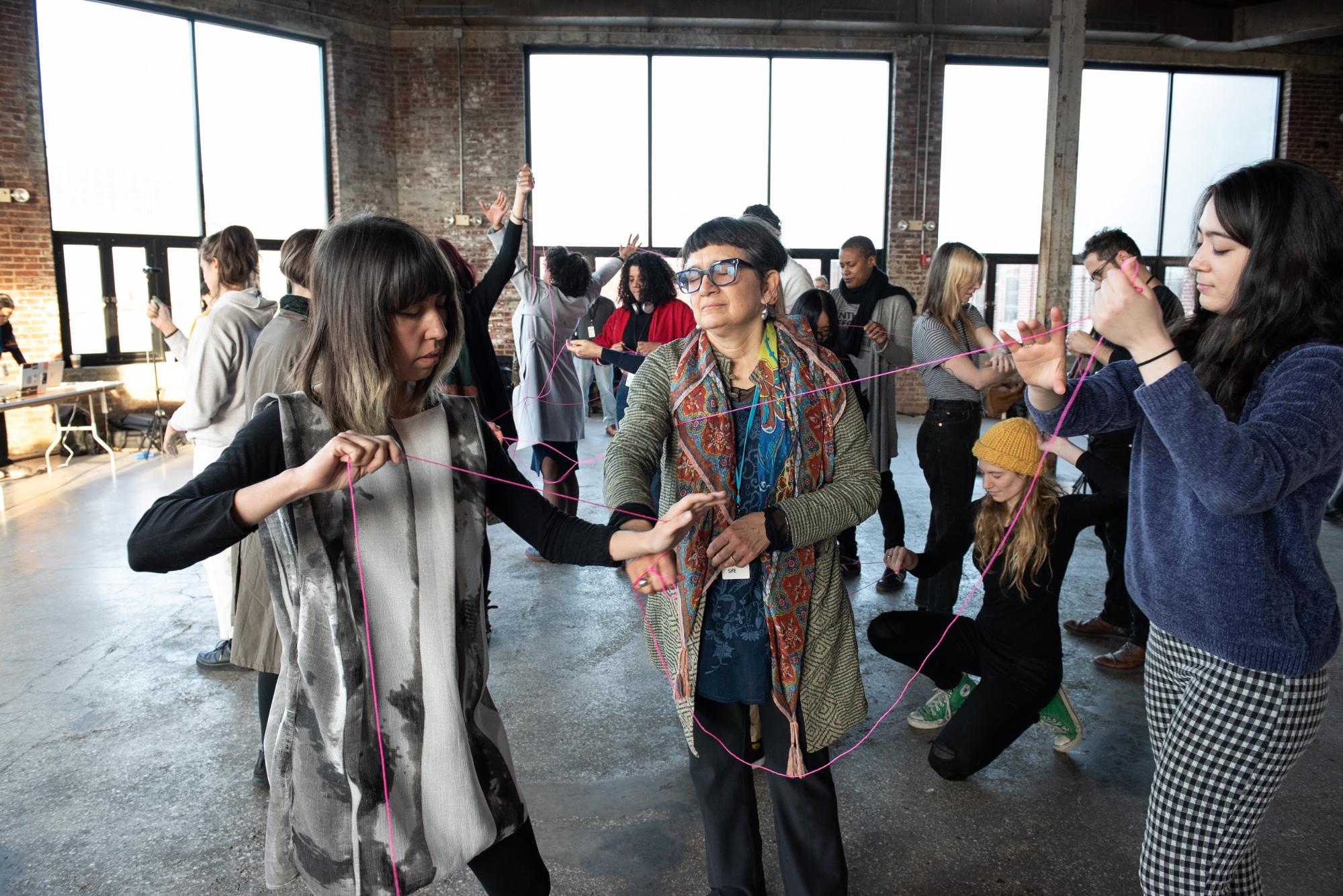 The facilitator asks the group if there is a ‘Code of Conduct’ that they would like to have for the group. When everyone in the group agrees on five principles of the network, they self initiate the network. 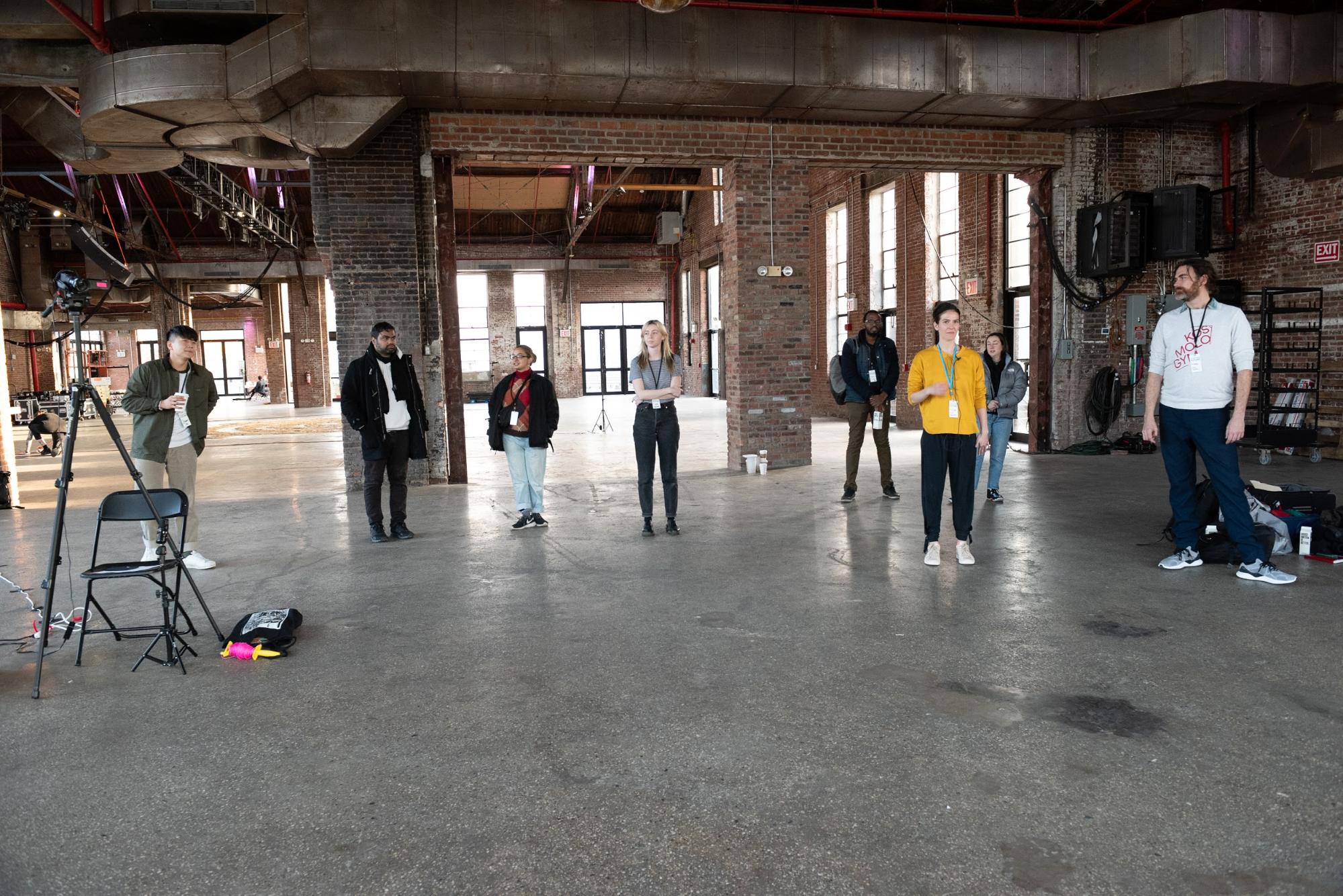 The facilitator presents the rule: Everyone can join or leave the network anytime. When they join by touching the strings, they need to close their eyes and constantly be moving in small or large gestures. Whenever they desire, they can leave the network and open their eyes. They can cut the strings and create new network or modify and add new rules. 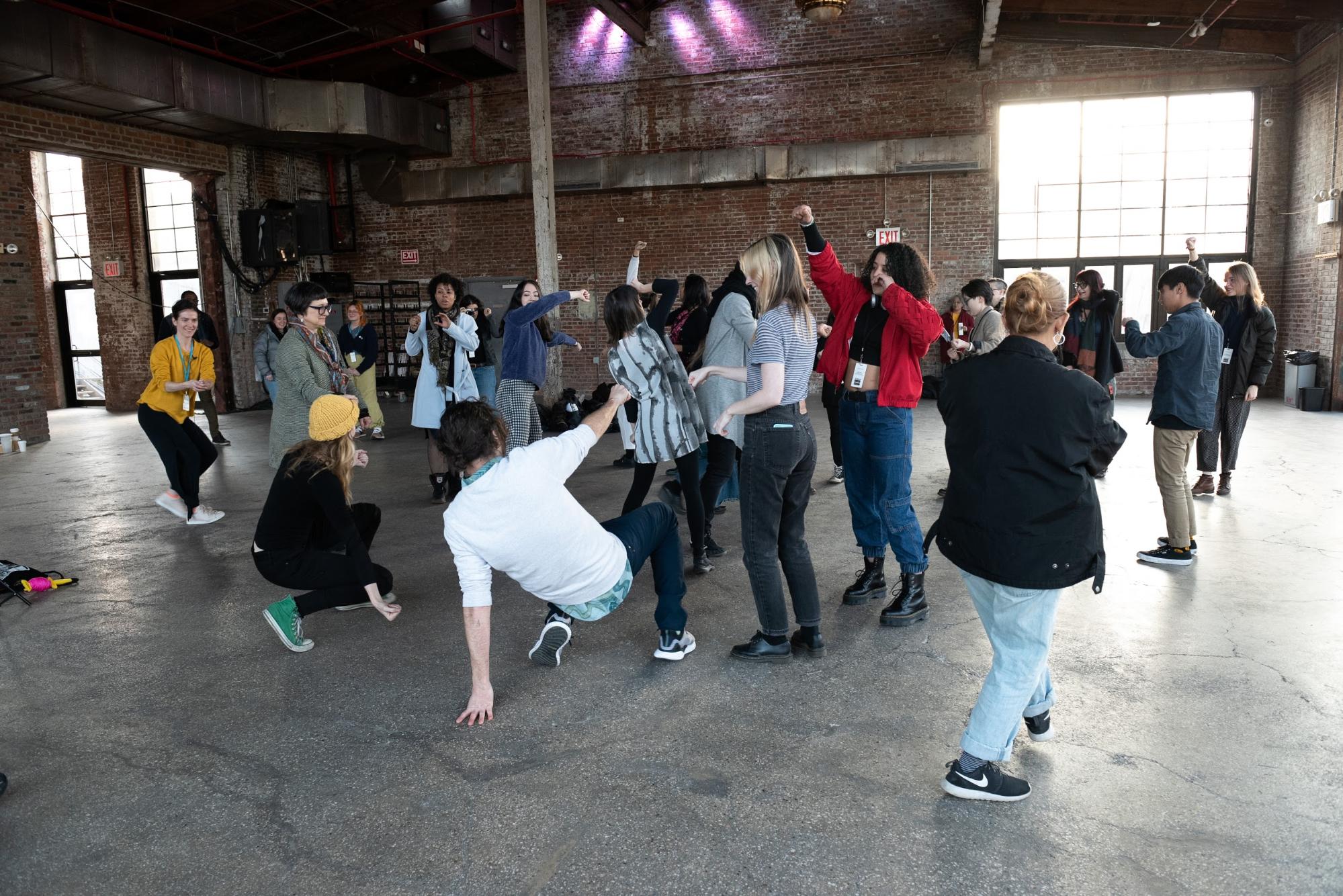 Now everyone is instructed to reenact the distributed network without the strings but moving their arms and bodies as though they are still holding string. They need to understand every movement they take on in the space will have effects on other people. 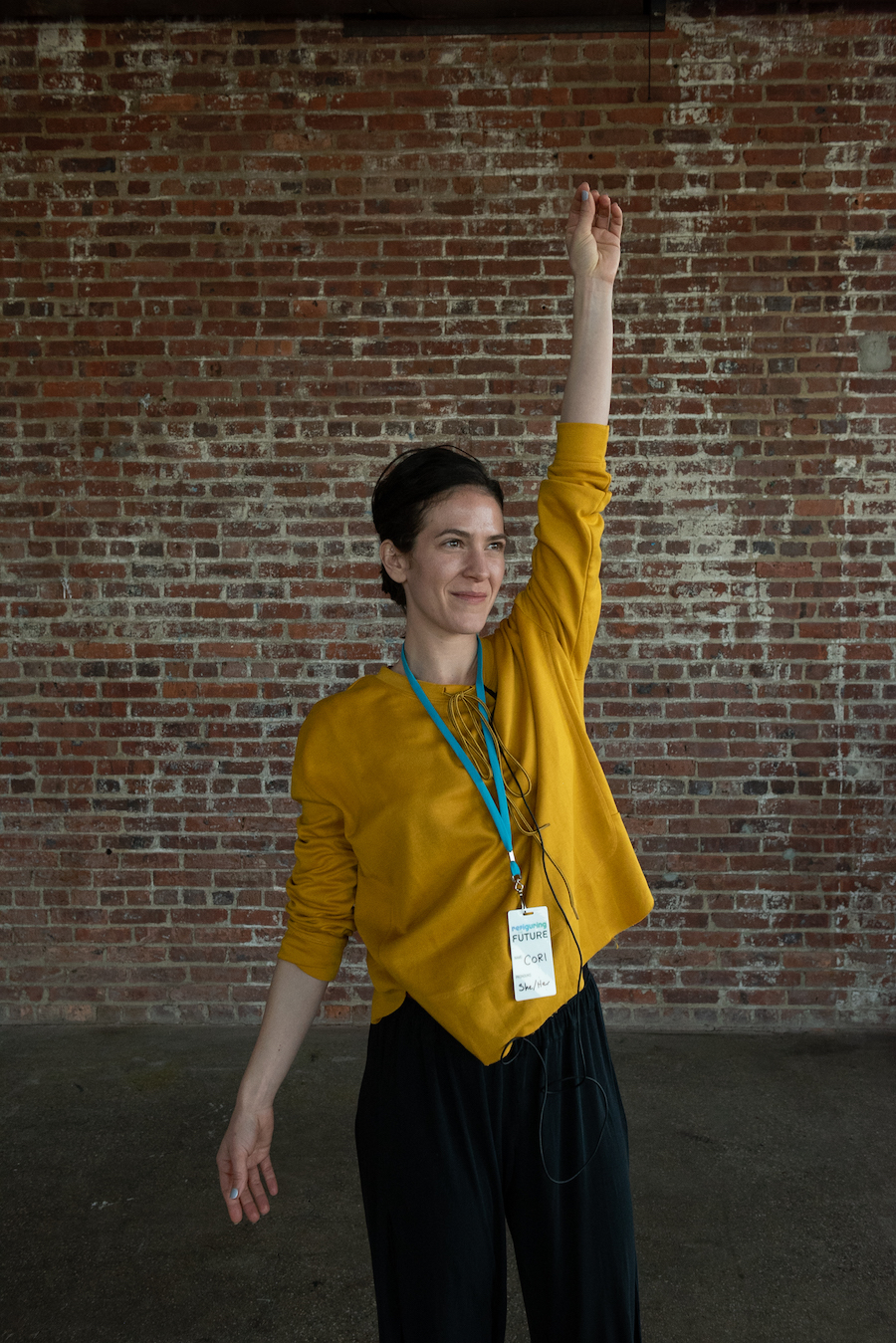 All photographs by Christine Butler

Cori Kresge is a NYC based dancer, collaborator, writer, and teacher. Kresge graduated from SUNY Purchase with a BFA in dance and the Dean’s Award. She was a member of the Sri Chinmoy Meditation Center and International Vocal Ensemble. Kresge has been a member of the Merce Cunningham Repertory Understudy Group, functioning as a living archive for Cunningham works from the 60’s, 70’s, and 80’s. In 2016 Kresge staged Cunningham’s Field Dances, an improvisational score, on students of CNDC, Angers, France. She has also been a member of José Navas/Compagnie Flak, and Stephen Petronio Company. Kresge currently collaborates and performs with various artists including Rashaun Mitchell+Silas Riener, Liz Magic Laser, Rebecca Lazier, Xavier Cha, Esmé Boyce, Ellen Cornfield, Sarah Skaggs, Bill Young, Wendy Osserman, Sally Silvers, The School for Poetic Computation, and film makers Alla Kovgan, Zuzka Kurtz, and Charles Atlas. She has taught technique and improvisation at NYU Tisch School of the Arts, Bard College, Dickinson College, Barnard College, Princeton University, the Dalton School, and other institutions. Kresge also teaches the Little Creators preschool program at Church Street School for Music and Art in NYC. She is currently studying Zero Balancing, a therapeutic bodywork.